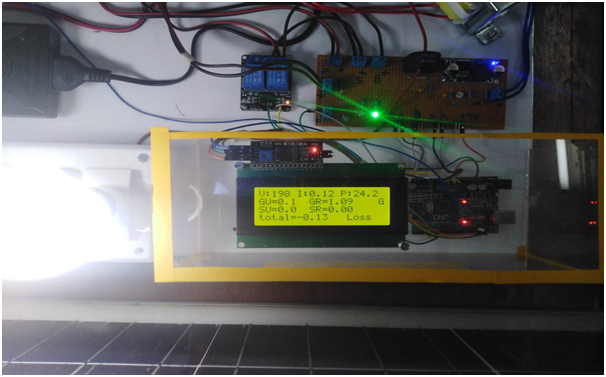 As an affiliate, we may earn a commission from qualifying purchases. We get commissions for purchases made through links on this website from Amazon.

Bi directional Energy Meter record, measure, and indicate both incoming and outgoing (self-produced electricity by renewable energy sources and excess to be sold to grid) electricity. A solar photovoltaic system is used in net metering. The design of a bidirectional energy meter is low cost, affordable to consumers for domestic application, and efficient. The current work focuses on the development of bidirectional metering which accounts for the net usage, export, and monetary exchange

GSM Based Bi-directional Meter consists of Arduino which acts as the main central processing unit and the LCD to display the net energy at regular intervals.

The net metering System using GSM consists of Arduino (Type of ATmega 328) as a processing unit. The input to the Arduino is fed from a voltage and current measuring circuit which processes the input data and calculates the net output energy using instantaneous values of voltage and current. The net output energy is displayed through LCD which is interfaced with Arduino.

There are three cases in GSM based Bi-directional energy meter

A 60 W incandescent lamp is considered as the load. When it is switched on by the supply either with grid or with solar, the voltage and current are measured and fed to the Arduino. The energy is calculated and displayed at regular intervals of 4 seconds on LCD.

Why do we need GSM Based Bi Directional Energy Meter?

In developing countries, the most used energy meters are ordinary meters without any smart features. If the users want to sell extra energy which they have produced by installing solar panels they can’t do so because of the unavailability of the net metering system. Also, we have installed a GSM feature in the meter which allows the user to get the net bill just by sending SMS.

In the short net metering system are the need of hours in all the countries across the world. After reading this article “GSM Based Bi Directional Energy Meter” you will be able to make your own smart metering system. We have tried to cover each aspect of the energy meter and will look for more and try to add those in the next update. Which functionality of the energy meter do you like the most? Let us know in the comments section below.